“The Ref Who Cried Chrono”

This story was taken from a field I used to frequent awhile back and I had a run-in with a certain ref who liked to cry chrono. The field obviously will remain nameless but the events of that game are still fresh in my mind as if it had happened yesterday. The first and most important thing you do as a participant of any scenario game is to chrono your gun. This is done to insure that all players are playing “safely” within the allowed limits of the field. But that’s where my fun begins with this story.

I was playing with my primary gun that I always ran with, a Dye DM 10 Aloha Edition, which is for sale if anyone is currently look for one hit me up on Facebook. Those who know me and my guns know that they never go over 285 and I tend to hold them back to about 260 to 265 for consistency and just overall performance. The morning in question, my gun was shooting in the 250 range and I chose to keep it there instead of taking the time to adjust it so I could spend extra time preparing for the game.

Once the horn blew and the game started, I made way to my spot on the field and dug in for what was going to be a long fight, or so I thought. Within a matter of minutes, I had a ref storm in yelling at me “you’re shooting hot” and proceeded to tell me I need to chrono. When I asked him to chrono me he replied “I don’t have one, you need to go back to base” I chose to play on. Mind you, I had a ref standing next to me giving away my position to those approaching and really pissing me off, to be honest. While I understand he was doing his job, if he bothered to look at my card he would see I was already checked prior to starting. As the other side, was creeping up on my position, the ref was there to lend a hand in pointing out my position. When they finally managed to take me out I went off the field to replenish the air tank and empty pods.

Here is where the story gets interesting… When I reinserted at the base I asked to verify my gun and the findings were astounding. The first shot was 240 then 242 followed by a 238 so I was obviously under the field policy that is 285. The base ref then proceeded to throw me an allen key and told me I could “crank it up” so I did. So after fighting my way back out to my previous spot I managed to take out a few people and then that same Ref came over yelling again that I was shooting way too hot and I needed to chrono. I asked him to chrono me and once again he tells me “I don’t have one, you’ll need to go back to base”. Determined to chrono me, we argue while I continue to play and I told him if he wanted to chrono me he’d have to go get one. I managed to shoot 3 people while arguing and their wiping paint was blatant as it’s hard to wipe a goggle shot. So, I asked him to go check and I’m surprised he did but he then called all 3 clean. My next action I’m not proud of but it got my point across to him that I was over his “Shenanigans”. While he was standing there I took the opportunity to take a “pot shot” at him and I nailed him in the stomach and he doubled over. I did feel a bit guilty but I think the point was well taken by him. While advancing up the field, I did stop by really quick and asked “if that felt hot to him” in which he replied “no”. I then told him I had chrono’d back at the base and they actually had me turn it up.

I normally wouldn’t act like that towards a ref but his blatant disregard for fair play got the best of me and I took it out on him. Now I’d normally say that 2 wrongs don’t make a right but in my case the point was well taken by him and he moved on to harass another person that game.

I love playing paintball but the one thing I despise is cleaning the day after. Cleaning the guns, lubing them and checking all the o-rings is usually a several hour process for me as I’ll tear the gun completely down. The other thing I guess I would despise if I had to do it was the clothes, luckily the wife takes care of that for me so it’s one less thing to deal with. At the end of the day I know the object is not to get hit and you should come home with no paint on you. In a perfect world that may happen, but usually not in mine as I’ll come home with some sort of paint on me. This outing’s color that I came home with was pink, yes you heard me I said pink. While I don’t mind the pink fill it’s usually in the middle grade paint which is usually a thicker fill and sometime tends to stain, but it’s easy to see who is hit. So as you’re setting back enjoying your Sunday, think of me as I’ve got my entire dining room table covered in paintball guns torn apart and getting ready for my next day of play. 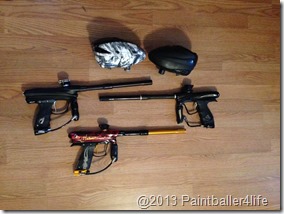 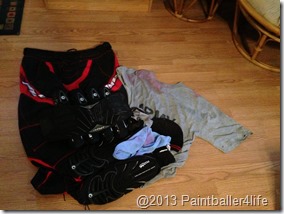 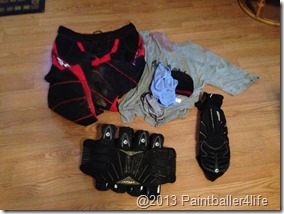 Do you have any hobbies that require maintenance after the fact? How long does it normally take to complete and get ready for your next outing?

Well the weekend is officially here and it’s time to do what I love to do and that would be play paintball. The place will be Gator paintball in Hudson, our home field and the group should be about 10 or so. The team has hit about 20 players but some won’t be able to make it. As always fun will be had by all…… even those who aren’t part of the team love it and always have a blast. I’m super excited because I’ll get to use my new paintball gun for the first time. It’s a limited edition Dye Black/Gold NT 11 that I was able to get thru a friend. I’ve been searching for one for about a year or so and became aware of its presence around World Cup 2012. I’ve been saving ever since and luckily my friend still had it when I finally got the money so I feel like it was meant to be. For those who don’t know much about paintball guns I guess an easy way to compare it for women to understand would be comparing it to a limited edition Coach purse.

What do you love to do with your Sundays? Who do you generally share this time with?

Several years ago when I first got into paintball my first gun I got was a Tippmann A5. I bought the Tippmann because of the style of play, price and the ton of options to customize it that were available at the time. With that being said the tough part was deciding on how I wanted the gun to look and perform. After searching for several weeks I finally found what I wanted to achieve but the next part of the puzzle was where to buy it from. We have a few shops here locally but none seemed to have what I was looking for so I searched the web where I stumbled across Rockstar Tactical Systems in Pennsylvania.

Rather than ordering from the web I chose to call because I was new to paintball and had a ton of questions. When I called I spoke with Dan and I do remember telling him I had a ton of questions. With that in mind he took the time to answer all my questions and I never felt pressured to buy anything that day, and I did not. The answers to all my questions had been answered but left me with the one question he couldn’t answer as only I could choose what I wanted to buy first. Taking several days to narrow down what I wanted was tough, but I finally had my list. So when I called back again I was surprised to have Dan answer and he had remembered our conversation and I promptly placed my order. I remember at the end he told me I should receive the order in 3 days. I wasn’t sure what to think about the 3 days as in the past from other places, it took 5 to 7 days minimum. I was pleasantly surprised when I got home on day 3 to my package sitting there waiting for me. Then came the fun part, I got to tear my perfectly working gun apart to throw all my new toys on it. Over the years I continue to purchase from Rockstar Tactical Systems as they stand behind the products they sell and are always there to answer questions. So for anyone looking to purchase paintball items or for those who just have questions I’d definitely recommend Rockstar Tactical Systems.

What do you look for when purchasing paintball parts?  Where did you buy your first parts from?