With the holiday season upon us, I figured it was time to mention Jingle Bikes for Kids again. In 2012 we decided that we would rekindle a tradition in our family started by the wife’s father, which through the kindness of family and friends we were able to donate 12 bikes total. We were extremely happy with the way 2012 went so we decided to team up with Toys for Tots again for our 2013 bike drive. I know 12 bikes doesn’t seem like a lot but imagine being one of those 12 lucky kids who received a bike for the holidays and it makes it all worth it. This year we got off to a late start and are behind a bit but thru family and friends I feel as if we’ll have another strong year. The wife and I went a few weeks ago and put ours on layaway at Walmart and we’ll be bringing them home in a few weeks. The wife also did a blog post which seemed to spark a lot of interest do so I figured I’d write one as well to mention what we feel is a very worth wild cause. When going thru the holiday season this year remember even the smallest of gifts donated may seem inconsequential to you, but you may just make someone’s holiday the best it has been in a while. Please visit our Facebook page. 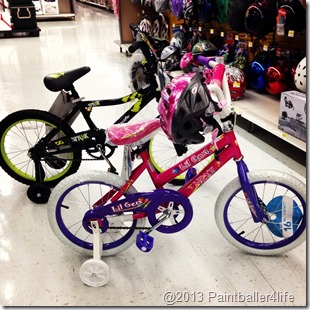 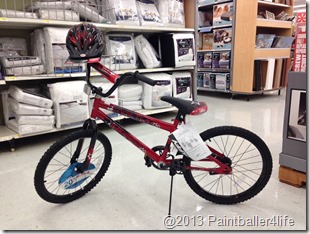 With 2013 starting off on a positive note I’ve decided it’s time for some changes in my life. No longer will I allow others to dictate how I spend my time and I’ve decided to allow for more “me” time. This year will be filled with the things I love such as paintball, theme parks and plenty of fun times with friends. Last year I allowed my life to be dictated by others and this made for some pretty miserable times. With that being said I’m holding myself personally accountable for the following.

This year I’ll work on trying to deal with family in a better way. I’m fine with most of my immediate family; however there are a few that the relationship is strained between. I’ll do my part to try and rectify things, but it’s a two way street and I’m not going to put in 100% of the effort.

2013 is the year of paintball for this guy and I’m committing to do at least three different scenario games. Whether they are at our local field, South Florida or even Georgia they are on my radar and I will pick at least 3. I missed out last year on a few events that I wished I had done, but time just didn’t allow for it. This year I won’t allow that to be a factor. I’ve made some good friends thru the sport and look forward to expanding and making even more friends who share this common interest in 2013.

This year I’m committing myself to a fit life. No longer will I be a slave to the sweets and allow them to affect me physically or emotionally. This is important to me as it will help me pursue my paintball aspirations. I know last year I said I wanted to play at least one tournament and I think this will be my year to do so. In 2013 I’ll be devoting more time to a sport I truly love and fully support. For those I know who play as well I wish you the best of luck in your upcoming season.

I’m holding myself personally accountable for at least one fun day every two months. This could be a simple as a quiet day at the beach with my wife or visiting our favorite Theme park (Universal Studios) for some fun filled rides and excitement. Either way it’ll be about taking time away from work to spend with the wife, something we are both equally guilty of doing.

With the year kicking into full gear already we’d like to spend more time doing charity work. This could literally be anything from helping out at Habitat for Humanity or even helping out with Toys for Tots. We’ll also be collecting bikes again for Jingle Bikes for Kids again. I was genuinely surprised at how few bikes they had to give out this past year.

What changes have you vowed to make in your life for 2013? How do you plan to accomplish them?

With 2012 coming to an end I’ve started thinking about New Year’s resolutions and decided 2013 is going to the “Year of Mike”. Something I’ve tried in the past but failed miserably at due to letting others manipulate my schedule. The year seemed as if it flew by and now with 2013 approaching it’s time to set some resolutions.

In 2013 I plan on creating a workout routine and sticking to it, holding myself accountable with goals and rewards. With that being said I’ve decided my goal weight is going to be 200lbs. This will leave me with about 35lbs to lose over the year and I know I can do it if I stick to my guns and workout as I have in the past. This will also be the year of my first 5k race. I’m not sure when or where, but I will commit to and run one.

In 2012 once again I’ve failed to take all my vacation time, time which my company gives to me and if I don’t use it I’ll lose it. I’ve determined vacation is going to be a key ingredient in making my resolutions a success. Vacation will also allow me more time to be spent doing the hobbies which I love to do. Hobbies that help maintain my sanity as well as reducing stress.

Charity is another area where I was lacking, but I feel 2013 will be a great year for us and doing as much charity work as our schedules will allow us to. This is going to be the year we spend growing “Jingle Bikes for Kids”.

I know I haven’t been blogging long, but I plan to be more active with my blog in 2013. This past year if I’ve only learned one thing about blogging is to post often. I’ve been thinking about this one for a bit and I’ll be attempting to expand my blog over the next year and create a more structured approach. I’ll be incorporating several items and features which over time should take me to where I’d like it to be.

What goals have you set your sites on for 2013? How do you plan on reaching and maintaining them?

Not many know but this Dec 4th was two years since my father in law passed. A man who I admired for many reason. He lived most of his life from a wheelchair but that never held him back in the least bit. From opening and running several businesses and always making time for family no matter what. He loved the holiday and family much more which why I’ve chosen to do this post today.

The past few months have been a constant reminder of how we all miss him but have decided to try and make a difference in our lives or the lives of others. As I previously posted this year the wife and I decided to create a tradition, one to honor his memory and let his spirit for the holidays live on. We’ve gone and bought two bikes and created a Facebook page called “Jingle Bikes for Kids”. The purpose for this page was to encourage those to take the time and consider donating a bike to “Toys for Tots” or any other charitable organization. After all the holidays are about the kids and who didn’t love waking up to find a new bike under the tree? He did love the holidays and all the joy it brought the kids.

On Friday Nov 30th 2012 the wife (who belongs to Yelp Elite) got an invitation to go attend a VIP party at Busch Garden’s (Christmas Town) an event that after going we knew it’s almost like it was designed for her father. The lit trees everywhere, Christmas carolers, sing-along train and many attractions are things he would have total enjoyed. Coincidence or Fate?

Prior to going to Busch Garden we had extra time before the event so we chose to eat prior to going. Right next door to Busch Gardens is Mel’s Hot Dogs yet another place my father-in-law loved so we ended up eating there. This was actually the first time I had been there but I knew of the place. From the minute I walked in I knew why my father-in-law loved the place. See he was a huge Coca-Cola fan and the colors in Mel’s reflected that, not to mention the food is awesome. So after eating we made our way to Busch Gardens and proceeded to enter. Walking thru the entire time I kept thinking “If he were still here this is where he would have wanted to come for the holidays”. As we continued thru we came upon a row of what appeared to be small cottages which sold everything from Christmas ornaments to delicious holiday treats. The wife and I stopped at one to get a hot cup of cocoa and a cookie. While we sat there in soaked in the sights and sounds I couldn’t help but think of my father-in-law. I could totally see him sitting there in his wheelchair sipping a hot cocoa and eating a cookie while carrying on a conversation with Mrs. Claus. Yes….. Mrs. Claus was there walking around taking pictures with people, signing autographs and greeting all the little ones (who all were smiling from ear to ear). Continuing on we stumbled across a huge Coca-Cola sign there and once again we thought of him. He was an avid Coca-Cola collector and it showed. If it was Coca-Cola related he either had it at one time or still did. Walking thru the park we next stumbled upon the sing along train. We boarded the train which took us around the park at night. The train lit with lights and played Christmas music for all to sing along with. I sat back and watched as kids as young as five to people in their eighties all smiling and singing along. After getting off the train we walked back to the front of the park enjoying once again all the holiday sights and sounds. As we were leaving I couldn’t help but think of my father-in-law as the whole experience start to finish was something he would have enjoyed. Also throughout the night we saw many things that made us think of him and helped us remember why many people loved and admired him. So as my wife and I drove home discussing the events of the evening and how strange it was we couldn’t help but wonder. Was the entire evening fate or purely coincidence?

Have you ever had a time where you felt like fate was the driving force in an event? Or do you feel as if it were pure coincidence?