Week 7 of the Couch to 5K is officially in the books but coming to you a week late. The previous week was chaotic between having to go to Orlando for work 3 days and also FLBlogCon, which just totally blew my schedule. I’m happy to report I’m back on track and finished out the week on a positive note. The weekly training which consisted of 5 minute warm ups, 25 minutes of running and then a 5 minute cool down is what week 7 had in store for me. I almost missed day 3 training due to helping a friend move and meeting another for dinner, I would have never made it. I had decided that I’d do my training later in the evening. Two pitchers of beer, chips and salsa, plus boneless honey BBQ wings over fries happened and I was wondering “how the hell am I going to run after all this”. The wife told me I was crazy for attempting this but I did squeeze in day 3 after all this and I must say I was actually surprised. Though I didn’t intend on running after our night out I’ve decided it needed to be done and I needed to hold myself accountable for my training. After all, I was the one who chose to indulge as I had so I needed to hold myself accountable for my training and carry on. 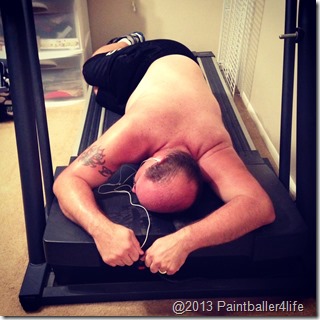 Have you ever had your schedule thrown off by work and how did you make it up? Would you ever attempt to run after a night of indulging?

Those familiar with me know I’ll never back down from a challenge so when the “Run Every Day in May Challenge “popped up I joined. At first I thought it would be a piece of cake and I’d breeze right through it, but the further into the month I got….. the harder it was. I’ll admit I made it ¾ of the way through the challenge before I gave in. Week one I was all pumped up and ready to take on the challenge, but by the end of week two it seemed monotonous and I was ready for it to be over. Week three brought procrastination and contempt for running and I actually found myself running the treadmill one night at 8:30 as I felt guilt for even thinking of skipping that day. Missing one day was the start of my downward spiral on the challenge and the end of my streak. That’s the one big difference between the wife and me. The wife runs because it’s her time to forget about everything and de-stress. For me on the other hand I run because I need to lose weight and also helps with my conditioning for paintball. While I’ve been slacking over the past few weeks (and it shows) I actually went for a birthday run with the wife Saturday. Granted it was under 1.5 miles we still went and I survived, barely but I did. I opted to skip this morning’s run but I have a feeling I’ll end up on the treadmill this afternoon for a mile or so to get back into a schedule. 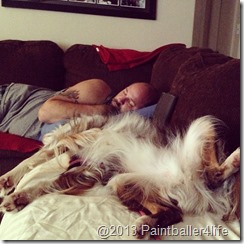 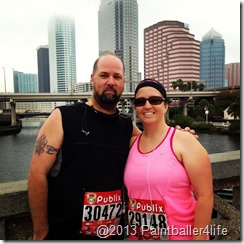 Have you ever taken on a challenge only to fail?