My name is Mike and I am a 45 year old paintball player. I like to think of myself as a weekend warrior.
I was born in Alexandria, Virginia and lived there until I was 15 when my family moved to Tampa. I graduated from Leto High in Tampa in 1990. I have a BS in Computer Information Science and I have worked in radio since 1995, doing both promotions and for the last 17 years, IT.

My wife and I met in 1999, married in 2001, and we live in Clearwater, FL with our two crazy Australian Shepherds, Blue and Ozzie.

I first played paintball in August 2009 as part of a bachelor party. It was two short weeks later that I bought first gun, a Tippmann A5. I played every couple months and then started playing as a team after 6 months or so. The first scenario game I played in was General’s Cup in May 2012. I have since played a couple more scenario games and continue to play with the core group that I’ve known since 2010. I try to play at least once a month.

Through the years, I have met a wide range of people who love play paintball. For some, it’s a once in a while hobby, others are out every weekend playing, and then there are the professional players.

In addition to playing paintball, I also enjoy following along with the professional teams, especially Tampa Bay Damage.

I started this blog in June 2012 because of my love of paintball. I felt it would be a great outlet to share my journeys and experiences as I became a Paintballer4Life. I also blog about trying to be healthy and whatever else may be important. 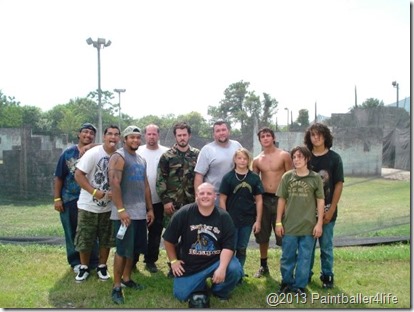